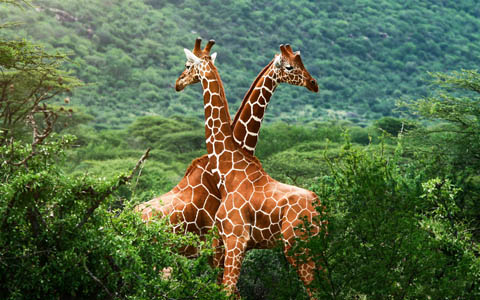 The principal features of the park are the flood plains and the grassland, mainly comprising of various types of acacia trees, and a few scattered baobabs, tamarind and the sausage trees. The Tarangire River, after which the park is named, provides the only permanent water for wildlife in the area. When the Maasai Steppes dry up with the end of the long rains in June, migratory animals return to the Tarangire River, making Tarangire National Park second only to Ngorongoro in the concentration of wildlife. This period stretches between June and November and it is the best season for game viewing in Tarangire.

Tarangire National Park, with an area of 2600 sq. kms, situated only 120 km from Arusha, is famous for its dense wildlife population. The park offers splendid view over the savannah, interpassed with acacia and baobab trees includes the swamps, river, and rock outcrops. The area is engulfed by several hills. Between June and December during this time of the year thousands of animals migrate from the dry Maasai steppe to Tarangire river looking for water.

Among species to be seen in Tarangire are buffalo, elephant, lion, warthog, eland, the fringe-eared , and a large number of impalas and gazelles. Tarangire National Park is also famous for tree climbing pythons and abundant bird life.

Best Time to Visit: From June to February.

How to get there: From Arusha to 2 hour drive or 35 minutes charter Flight.